Vacuum skin flim: The key to the technology is the performance of the packaging film (such as thermoforming stretching, puncture resistance, etc.), and the vacuum pump in the machine also has extremely high requirements, the simple process flow is shown in the figure below. First, the bottom film is thermoformed into boxes or prefabricated boxes and filled with fresh food inside; second, the process of lamination is realized. After the top film is heated and softened, vacuum is applied to the cavity between the film and the bottom box, and then the top film moves downward due to the pressure difference between the top and bottom sides and gradually adheres to the freshness to fit its contour, relying on the molten gel on the surface of the film to adhere to the surface of the bottom box. The packaging form at the time of sale.
In the past, food factories that used food lamination film (food vacuum lamination film) were mainly export-oriented seafood factories, which exported their seafood products to Japan and Korea after vacuum lamination packaging. Some large supermarkets have also started to sell fresh products, and vacuum lamination packaging has become widely popular in the frozen and cold food industry.
The first advantage of skin film is that the transparency of the film is very high, using the original imported polymer resin, after multi-layer co-extrusion blown film and packaging film, the gloss is very high, seafood steak and other food products after vacuum laminated packaging, the product appearance is beautiful, the inner packaging products are clearly visible, highlighting the value of the product and grade, for the product and brand value-added a lot.
The second advantage of food lamination film is that it has good extension performance, the film can be tightly fitted on the appearance of seafood steak and other food products, just like a transparent skin, so that the product has a sculpture-like three-dimensional sense, the wonderful shape of the product is called out, so that customers increase the sense of closeness and desire to buy.
The third advantage of food vacuum skin film is that the good oxygen and water vapor barrier rate ensures that the packaged beef and seafood products have the ideal shelf life and reduce the loss caused by traditional transportation.
The fourth advantage of food packaging films is the ability to place the vacuum tunnel effect and the generation of freeze spots.
China is currently proposing the concept of internal economic recycling, so the beef and seafood industry will benefit from this trend, which will inevitably lead to a significant growth in the food packaging film industry. 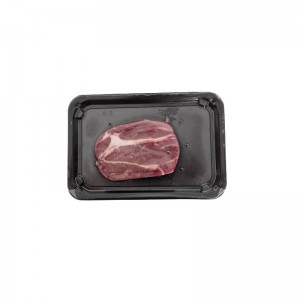